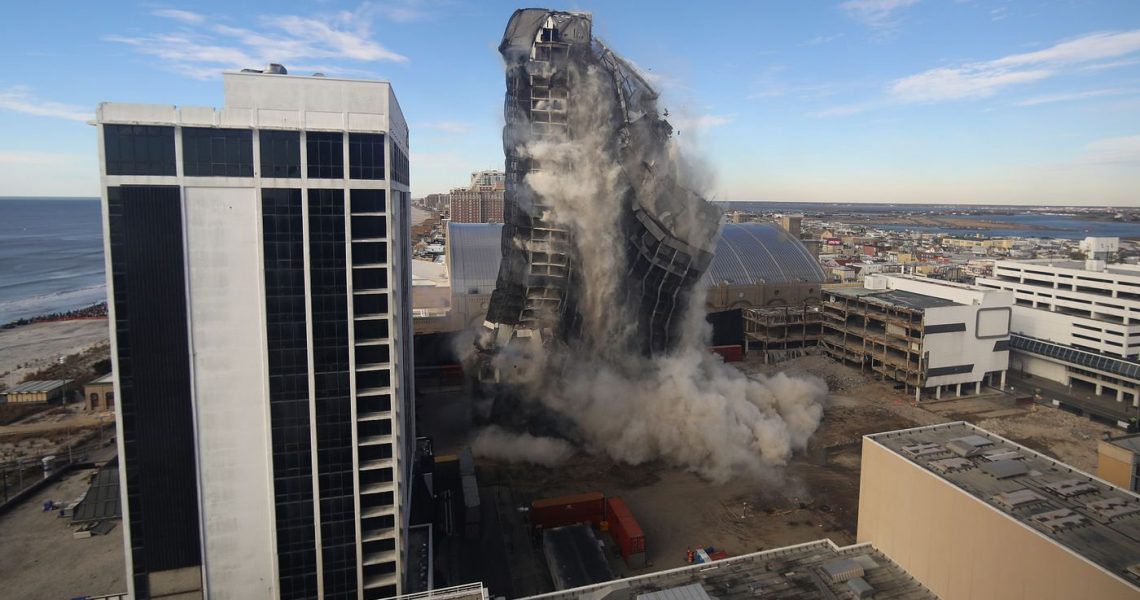 The Trump presence is no more in Atlantic City after the Trump Plaza was imploded today. Donald Trump was a driving force behind the growth of the Boardwalk gambling town years ago and while he was no longer a part of the casinos which bared his name in the city, his presence was still felt there. The Trump Plaza and Trump Taj Mahal were two venues that the former president created in AC, with the Plaza shutting down in 2014 and sitting dormant ever since. The Taj Mahal got a new look not long ago, now operating as the Hard Rock Atlantic City. Now that the Plaza has been demolished, the property can be used for a variety of options in the town, though no plans have been made public as of yet.

Trump Plaza was created in 1984 by Donald Trump and was immediately a popular location in Atlantic City. People came to the venue to gamble as well as enjoy a quality hotel stay. Major boxing matches as well as wrestling events took place at the Boardwalk Hall, which sat next to the Plaza. Top performers made this location a traditional stop on their tours. Big names such as Aretha Franklin and The Rolling Stones were known to play here.

By 1990, Trump has opened the Trump Taj Mahal nearby and that is when everything started to go downhill. The property started to drown in debt and the status of the Plaza took a hit as well. Trump got out as quickly as he could and ended up removing himself financially from the casinos in Atlantic City by 2009.

By 2014, the Plaza was shut down. The Trump Taj Mahal followed two years later. While the Taj was able to reopen as the Hard Rock, the Plaza was not so lucky. Investor Carl Icahn was able to acquire the Plaza out of bankruptcy court in 2016 but never did anything with the property.

Over the years, the façade of the Plaza began to wear away and it was becoming a hazard on the Boardwalk. Atlantic City mayor Marty Small began to push for the demolition of the property. Finally, everything lined up and the facility was imploded today.

It was reported that around 3,000 sticks of dynamite were used to bring down the large building. The interior had been gutted a bit to help the building fall into itself and avoid harming any nearby businesses.

Piggybacking on the Event

As the day for the implosion drew near, casinos, as well as officials, began to try and cash in on the event. Early on, an auction was created to provide the winner with the right to push the button for the explosion. It didn’t take long before $175,000 was raised, with all the proceeds going to the Boys and Girls Club of Atlantic City. However, Icahn stopped the auction saying there were safety concerns involved.

Another auction was started up to provide people with prime viewing spots for the explosion. This auction reportedly earned around $6,000. Caesars decided to provide an overnight stay package where visitors could pay for rooms with a view of the Trump Plaza. Anyone staying at the Caesars could simply watch the property fall down from the comfort of their hotel room.